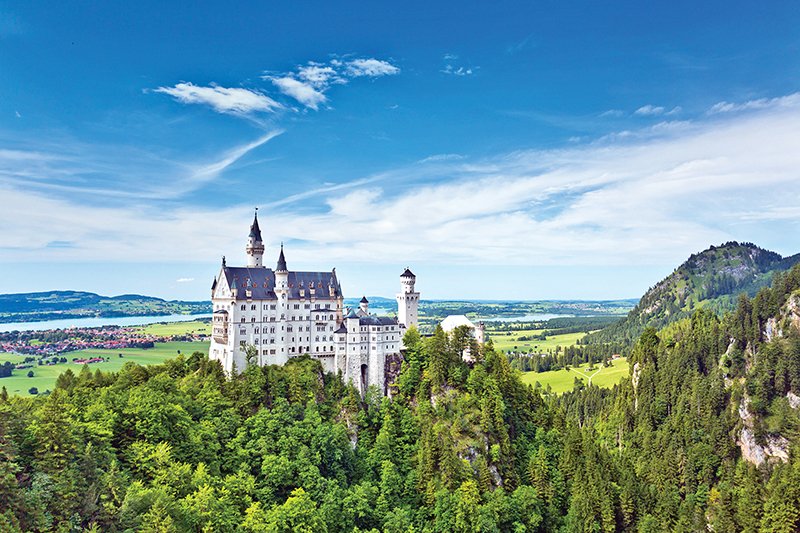 As we’ve had to postpone our travels because of the pandemic, I believe a weekly dose of travel dreaming can be good medicine. Here’s a reminder of the fun that awaits us in Europe at the other end of this crisis.

Germany can overwhelm you with too many castles in too little time. My three favorites are the remote and beautifully preserved Burg Eltz, the ruined but powerful Rheinfels, and the 19th-century fantasy of Neuschwanstein.

Burg Eltz is my favorite castle in all of Europe. Lurking in a mysterious forest above the Mosel River, it’s furnished throughout as it was 500 years ago. Thanks to smart diplomacy and clever marriages, Burg Eltz was never destroyed. It’s been in the Eltz family for 850 years.

The first burg (castle) on the Eltz creek was built in the 12th century to protect a trade route. By about 1490, the castle looked like it does today: the homes of three big landlord families gathered around a small courtyard within one formidable fortification. Today, tours wind through two of those homes (the third is the caretaker’s residence). The elderly Countess of Eltz traces her roots back 33 generations. She enjoys flowers and has had the castle’s public rooms adorned with grand floral arrangements every week for the last 40 years.

It was a comfortable castle for its day: 80 rooms made cozy by 40 fireplaces and wall-hanging tapestries. Many of its 20 toilets were automatically flushed by a rain drain.

Rheinfels Castle, both much mightier and much more ruined, lords over its bend in the nearby Rhine River. It sits like a dead pit bull above the village of St. Goar. This most formidable of Rhine castles rumbles with ghosts from its hard-fought past. Burg Rheinfels was built in 1245 and withstood a siege of 28,000 French troops in 1692, the only Rhineland castle to withstand Louis XIV’s assault. But in 1797, the French Revolutionary Army destroyed it. Once the biggest castle on the Rhine, it spent the 19th century as a quarry. So today, while still mighty, it’s only a small fraction of its original size, a hollow but evocative shell.

For centuries, the massive Rheinfels was self-sufficient and ready for a siege. During the age of sieging (which lasted until the advent of modern artillery), any proper castle was prepared to survive a six-month attack. Circling the central courtyard, you’d find a bakery, pharmacy, herb garden, brewery, well, and livestock. During peacetime, about 400 people lived here. During a siege, there could be as many as 4,000. Those 4,000 people required a lot of provisions. The count owned the surrounding farmland. In return for the lord’s protection, farmers got to keep 20 percent of their production. Later, in more liberal feudal times, the nobility let them keep 40 percent. (Today, the German government leaves workers with 60 percent after taxes…and provides a few more services.)

Neuschwanstein is entirely different. It’s the greatest of the fairy-tale castles of King Ludwig II, whose extravagance and Romanticism earned him the title “Mad” King Ludwig…and an early death.

While it’s only about as old as the Eiffel Tower, Neuschwanstein Castle is a textbook example of 19th­-century Romanticism. After the Middle Ages ended, people disparagingly named that era “Gothic,” or barbarian (“of the Goths”). Then, all of a sudden, in the 1800s, it was hip to be square, and a new Gothic style — or “Neo-Gothic” — became all the rage. Throughout Europe, old castles were restored and new ones built, wallpapered with chivalry. King Ludwig II put his medieval fantasy on the hilltop not for defensive reasons, but simply because he liked the view.

The lavish, Wagner-inspired interior, covered with damsels in distress, dragons, and knights in gleaming armor is enchanting. Ludwig had great taste…for a mad king. He was a political misfit: a poetic hippie king in the realpolitik age of Bismarck. After Bavarians complained about the money Ludwig spent on castles, his sanity was questioned. Shortly after that, the 40-year-old king was found dead in a lake under suspicious circumstances, ending work on his medieval fantasy-come-true. Ludwig almost bankrupted Bavaria building Neuschwanstein. But today, Germany is recouping its investment a hundredfold as huge crowds from all over the world pay to pack Europe’s most popular castle.

Germany’s history is long and many-faceted. Whether noble residences with flowers, feudal fortresses with rat-filled dungeons, or Romantic palaces fit for a king, its castles have become both amusement parks and classrooms.

This article was adapted from Rick’s new book, For the Love of Europe.

Berlin Looks to the Luxury Sector

Away’s New Soft-Sided Suitcases Are Made For Over-Packers