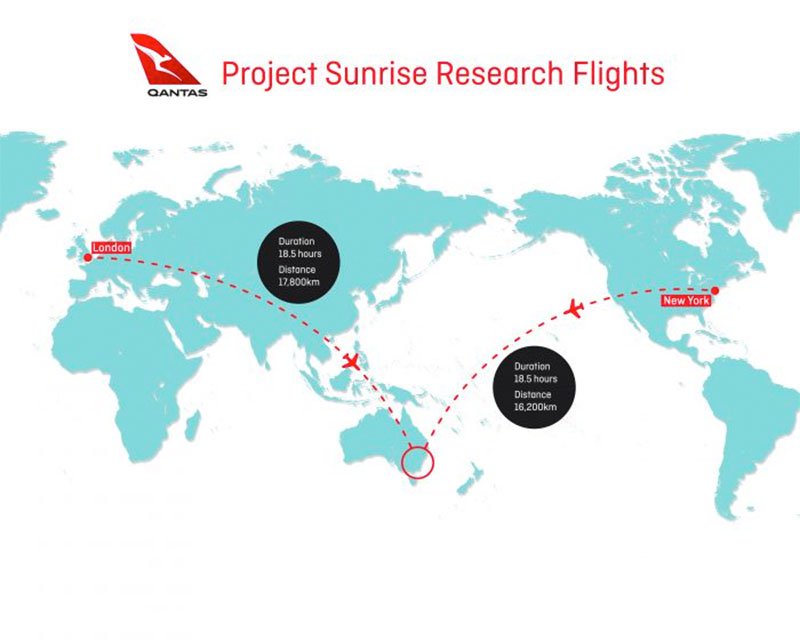 Big news for travel to Australia: Qantas is conducting three research flights to explore the viability of ultra-long-haul flights between Sydney and London and New York. Dubbed Project Sunrise, Qantas says the flights will look to test the long flights’ effects on the health and wellbeing of the passengers and crew onboard.

The eventual goal of the project is to operate regular, nonstop commercial flights from the east coast of Australia (Brisbane, Sydney and Melbourne) to London and New York, Qantas said. The three test flights, which will take place in October, November and December, will use new Boeing 787-9 aircraft and reroute their planned delivery flights. Instead of flying empty from Seattle to Australia, the aircraft will simulate two Project Sunrise routes, from London and New York to Sydney.

The test flights will represent the world’s first flight by a commercial airline direct from New York to Sydney and only the second time a commercial airline has flown direct from London to Sydney, Qantas said. To make the long routes possible, each flight will carry a maximum of 40 people, including crew, in order to minimize weight and give the necessary fuel range. Qantas said that the carbon emissions from the flights will be fully offset.

Qantas said it is conducting the research in partnership with Sydney University’s Charles Perkins Centre and Monash University in conjunction with CRC for Alertness, Safety and Productivity.

During the flights, people in the cabin—most of whom will be Qantas employees—will be fitted with wearable devices and take part in specific experiences at varying stages of the approximately 19-hour flights. Scientists and medical experts from the Charles Perkins Centre will monitor sleep patterns, food and beverage consumption, lighting, physical movement and inflight entertainment to assess impact on health, wellbeing and body clock, Qantas said.

Monash University researchers will work with pilots to record crew melatonin levels before, during and after the flights. Pilots will wear an EEG (electroencephalogram) device that tracks brain wave patterns and monitors alertness. The aim is to establish data to assist in building the optimum work and rest pattern for pilots operating long haul services, according to the airline.

Qantas also said that it has already conducted data on passenger sleep strategies on its direct Perth–London service, and some of these initial findings will be assessed further as part of these dedicated research flights. Customer feedback on food choices, separate stretching and wellbeing zones and entertainment options will also be tested.

Qantas said that it will share its findings with the Civil Aviation Safety Authority to help inform the regulatory requirements associated with ultra-long haul flights.

Qantas has been exploring the possibility of direct flights between Sydney and New York and London for some time. In 2017, it issued a challenge to Airbus and Boeing to give two of their next-generation aircraft—the A350ULR and the 777X—the range to make the flights possible with a full complement of passengers. At the time, the airline said it wanted to launch the new routes by 2022.

US Lays Out Enforcement Priorities for Animals on Planes