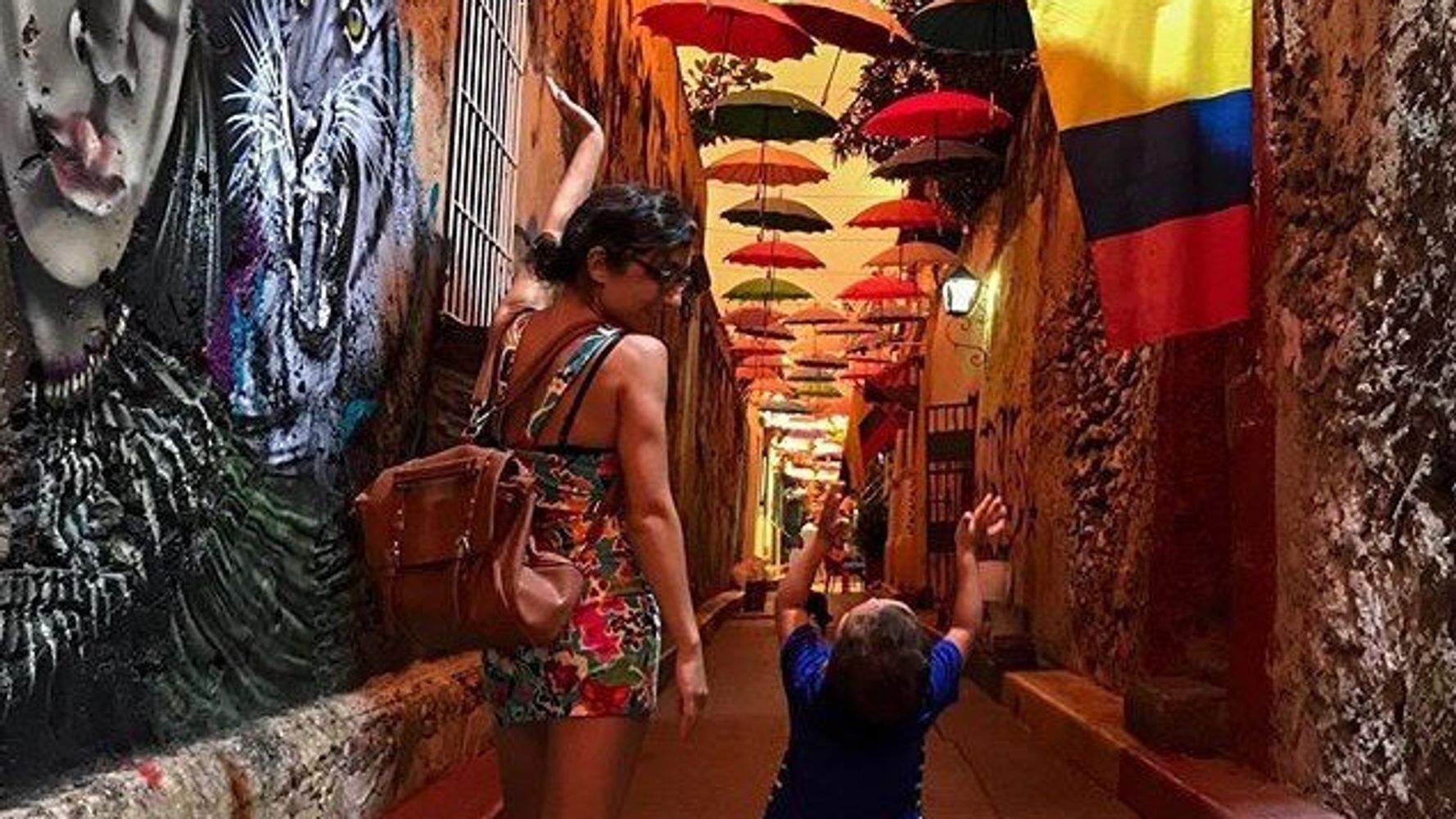 When my partner and I first told our friends and relatives we were giving up our apartment to travel full time with our 1-year-old son, their reactions ranged from admiration to disapproval. If only I could do that, some said. This will be so enriching for your son, others congratulated. He’ll learn so many languages! You guys are so brave! Others pointed out that babies love routine and he wouldn’t have one. They predicted he’d get sick on planes and buses. They told us we needed to be more realistic about our finances.

Regardless of their stance, everyone was convinced it would be really hard. My partner and I were as worried about the negative things as we were thrilled about the positive. We’d reply that trying this out was our dream, and that we were excited to teach our son to travel.

The idea began to take shape while we were expecting. We were living in Argentina, where we’d arrived independently some years earlier ― my partner as a masters student and me as a backpacker ― and extended our stays for work opportunities. We met through an international group of friends where everyone was always talking about other places, and we hadn’t thought about Argentina as a long-term plan. Now that we were having a baby, though, people started to ask us if we were staying. We asked ourselves that as well, and decided that exploring somewhere new as a family unquestionably sounded more interesting.

But where would we want to go? How old would our baby need to be to move countries? How much would we have to save up? We got down to analyzing world maps, budget spreadsheets and infant vaccination calendars. The version one plan of spending a very budget-conscious six months in a less expensive country turned into the dream of a year across multiple countries when I got an opportunity to work remotely for part of the trip, and we got inspired to add more places along the way.

Now that we were having a baby though, people started to ask us if we were staying. We asked ourselves, too, and decided that exploring somewhere new as a family unquestionably sounded more interesting.

Our initial weeks as nomads, playing house in an airy and colorful apartment just off the beach in the state of São Paulo, were mostly blissful but also stressful. It was off-season and colder than we expected, and we wandered along the almost-empty beaches, refreshed by the breeze and feeling like the place was ours. It was like vacation, even as it was strange to think that we no longer had an actual home that we’d be heading back to.

When we chose to start our trip in Brazil, we imagined that being in a foreign country where none of us knew the language would be romantic. It was when we were on our own, but something else when it came to needing to talk to people. Not being able to speak Portuguese immediately became a source of stress, starting the moment we touched down. Exhausted from a middle-of-the-night layover in Paraguay, we waited an unnecessary four hours at the airport after multiple unsuccessful attempts to figure out which bus to take. At the bakery the next morning, I felt mute, frustrated that I couldn’t ask about the enticing pastries. I knew a few basics, but the words wouldn’t come out.

A couple weeks into our adventure, during which we mostly kept to ourselves, a woman sitting behind us on a bus one day started to interact with our son, waving at him and chatting him up with questions. He barely had “mama” and “papa” down at this point, but to my amusement, he started to smile and babble right back at her with invented words. By the time we jumped off at our stop, they had conducted a full, apparently very engaging conversation. He didn’t speak any language and certainly didn’t know Portuguese, but he didn’t care. He wanted to communicate and he went at it with confidence ― and somehow he and this lady understood each other.

So I tried to copy my 1-year-old. Whenever I wanted to talk to someone, I’d focus on projecting myself and my intention to communicate, not my language skills. If I didn’t know, I laughed, tried, used Spanish or English words I hoped they knew ― anything to get the point across. And it worked. In Brazil, we navigated signing our son up for activities, signing ourselves up for surf classes, finding our way around big cities, getting locals to take part in our YouTube videos, and ordering all the most delicious pastries. We even made some really good friends.

We got good at setting up house in different places, baby-proofing and teaching our son to do tricky areas of each apartment, like steps or high beds.

Six months and eight temporary apartments later, we arrived in Mexico City. By this point, we were getting the hang of nomadism. We got good at setting up house in different places, baby-proofing and teaching our son to navigate the tricky areas of each apartment, like steps or high beds. We were experts in stocking empty kitchens with essential groceries. We had learned to use just about every coffee maker on the planet. And our son was now an expert in turning ordinary objects into toys: colorful Tupperware, fresh fruits and vegetables, empty paper towel rolls and water bottles ― you name it.

But this new apartment threw me for a loop. Trying to make everything fit, the owner had placed items in odd places and used a series of extension cords to get appliances hooked up to their outlets. Every drawer in the apartment was filled with an assortment of small items, including coins and medications. The kitchen had heavy saloon-style doors that swung back forcefully when you pushed them. Virtually everything was a baby hazard, and doing my usual sweep, I was overwhelmed with how many things had to be done to make this place safe and livable. I literally started to cry.

When I talked to my partner about how I felt that night, he pointed out that having issues with each apartment we rented was almost a habit of mine, and I was embarrassed to admit he was right. I remembered that place with really hard floors just when our son was learning to walk, and that other one with steps between each room before he’d learned to do steps (he got good at it there), a tiny apartment with a mold problem, and a huge one where we could never figure out which room our mobile toddler had run off to.

We’d spend hours on Airbnb checking out the apartments we ended up occupying, but there were always issues we hadn’t predicted. I was dismayed every time, but we were always able to figure it out and get comfortable. Our kid, on the other hand, didn’t have any problem with any apartment. Why would he? Every space had so many cool things to explore! This lifestyle is all about adapting to new places, I thought, and he’s a much better nomad than me.

As a mom, I’m the one who’s more comfortable with consistency and a specific kind of environment for my child ― but he doesn’t care about that

Another six months later, we were in Cartagena, Colombia. It was incredibly hot, and the apartment we’d carefully picked out turned out to be the tiniest one yet. In search of an activity for our son, we decided on our go-to: the children’s section of the library! So we trekked across the Walled City, which is a challenge when it’s over 90 degrees, the sidewalk is exactly the width of your stroller, and the high curbs have no ramps whatsoever. We’d promised a library, and we were headed to one whose Google maps photos showed a promising children’s room.

When we finally got there, we were told that the library was under renovation, but had a temporary location at a nearby bank. Then when we got there, the children’s section we discovered was literally a square-meter space with two shelves of books, a small chair, and a couple of beanbags. Oh no, I thought, he won’t have fun here. We’d been lucky to discover some really amazing public spaces for kids on our travels, and after experiencing these places, this just wouldn’t work. But it worked. My son was totally happy to plop down and start perusing the dusty books with us, and we spent almost an hour there.

It was no different when we came to another library, this time in Bogotá, the following month. This one had a play area, but it was full of incomplete playsets and broken toys. My son ran straight to the kitchen playset, but apparently all the pots and pans and most plastic foods had gotten lost. I was disappointed for him, but he was fine. Seconds later, he was using some random container to cook a banana on the stovetop, and he was having fun. He didn’t judge or get disappointed that this place wasn’t as nice as some others. I saw that it didn’t matter to him, because toys are toys, and he can have fun anywhere.

Isn’t that what being a good traveler is all about? Communicating, adapting, and having a good time? It’s not always easy for an adult. It means looking past insecurities, worries, and unmet expectations. In 17 months of travel, we’ve visited about 50 cities and towns in 20 states across five countries. And the biggest thing I’ve learned is that as a mom, I’m the one who’s more comfortable with consistency and a specific kind of environment for my child ― but he doesn’t care about that. It comes naturally to him to make himself at home and get down to playing everywhere we go. While I myself have struggled with going outside my comfort zone, my child has led the way.

So far, people’s assumption that it’s hard to travel with a kid has been far from true for us. Instead, our son has inspired us and cheered us up when we’ve faced challenges. He has proved to be the best traveler, and he has taught me a lot about how to do it right.

Have a compelling first-person story or experience you want to share? Send your story description to pitch@huffpost.com.